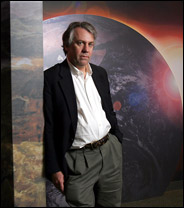 "...But in August, two weeks before Hurricane Katrina struck the Gulf Coast, Professor Emanuel wrote in the journal Nature that he had discovered statistical evidence that hurricanes were indeed affected by global warming. He linked the increased intensity of storms to the heating of the oceans.

"His paper has had a fantastic impact on the policy debate," said Stephen Schneider, a climatologist at Stanford. "Emanuel's this conservative, apolitical guy, and he's saying, 'Global warming is real.' "