Showing posts from June, 2007
Show all 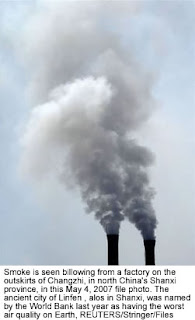 by Jonathan Watts / John Vidal, The Guardian UK BEIJING - On a bad day - which can be hundreds in a year - the ancient city of Linfen in the northern province of Shanxi is environmental hell. Named by the World Bank last year as having the worst air quality on Earth, its 3.5 million people more often than not choke on coal dust; its soil and its rivers are covered with soot, and its Buddhas are blackened and shrouded in a toxic mist. The cause is Linfen’s 196 iron foundries, its 153 coking plants, its unregulated coalmines, tar factories, steelworks and domestic homes, all of which burn cheap, easily accessible brown coal. Shanxi is the centre of China’s vast and growing coal industry, which was pinpointed yesterday by Dutch government scientists as the major culprit, along with the cement industry, in the country’s sudden surge to the top of the world’s league of greenhouse gas emitters. In the last six years, the Chinese coal industry, with reserves put at more than 1 tril
2 comments
Read more 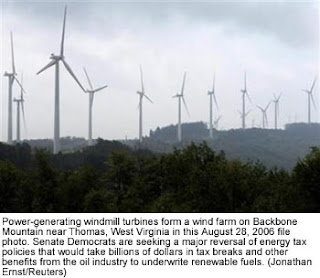 by Edmund L. Andrews, NY Times, Posted on Commondreams WASHINGTON - Senate Democrats are seeking a major reversal of energy tax policies that would take billions of dollars in tax breaks and other benefits from the oil industry to underwrite renewable fuels. The tax increases would reverse incentives passed as recently as three years ago to increase domestic exploration and production of oil and gas. The change reflects a shift from the Republican focus on expanding oil production to the Democratic concern about reducing global warming. More....
1 comment
Read more
More posts