Showing posts from November, 2006
Show all

Energy Use Can Be Cut by Efficiency, Survey Says

Steve Lohr, NY Times The growth rate of worldwide energy consumption could be cut by more than half over the next 15 years through more aggressive energy-efficiency efforts by households and industry, according to a study by the McKinsey Global Institute, which is scheduled to be released today. The energy savings, the report said, can be achieved with current technology and would save money for consumers and companies. The McKinsey report offers a long list of suggested steps, including the adoption of compact fluorescent light bulbs, improved insulation on new buildings, reduced standby power requirements, an accelerated push for appliance-efficiency standards and the use of solar water heaters. More
1 comment
Read more 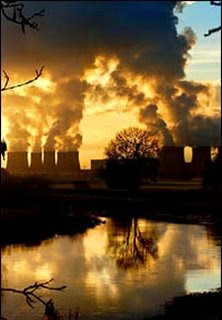 by Richard Black BBC The rise in humanity's emissions of carbon dioxide has accelerated sharply, according to a new analysis. The trend towards increased energy efficiency is levelling off. The Global Carbon Project says that emissions were rising by less than 1% annually up to the year 2000, but are now rising at 2.5% per year. It says the acceleration comes mainly from a rise in charcoal consumption and a lack of new energy efficiency gains. The global research network released its latest analysis at a scientific meeting in Australia. Dr Mike Rapauch of the Australian government's research organisation CSIRO, who co-chairs the Global Carbon Project, told delegates that 7.9 billion tonnes (gigatonnes, Gt) of carbon passed into the atmosphere last year. In 2000, the figure was 6.8Gt. "From 2000 to 2005, the growth rate of carbon dioxide emissions was more than 2.5% per year, whereas in the 1990s it was less than 1% per year," he said. The findin
Post a Comment
Read more

What Did You Buy?

November 25, 2006
Well, Black Friday has come and gone. Buy Nothing Day seems to take on more of an urgency for me this year. Oh it's not that I didn't feel the crush of impending doom last year, I did. This year we have seemed to turn a corner of sorts in regards to public awareness (note I did not say "acceptance") of global warming. There appears to be varying degrees of understanding of just what is going on here with the public and the numbers of deniers seem to be going the way of many of our animal species. ExxonMobil continues to use it's mighty power in the media to keep those oil I.V's firmly attached. It is going to be a hard realization for those of us who have become dependent upon big media for their information to understand that the enemy is us. Uncle Al's movie Inconvenient Truth did seem to help. I was somewhat comforted to see that upon a visit to my local video store none of the dozen or so DVD's of Inconvenient Truth were available, all rented. Some
2 comments
Read more 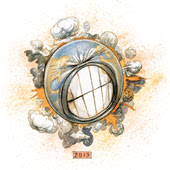 'Very different and frightening world' coming faster than expected, scientists warn by Seth Borenstein, Associated Press, posted on Commondreams "...Just five years ago biologists, though not complacent, believed the harmful biological effects of global warming were much farther down the road, said Douglas Futuyma, professor of ecology and evolution at the State University of New York in Stony Brook. " "I feel as though we are staring crisis in the face," Futuyma said. "It's not just down the road somewhere. It is just hurtling toward us. Anyone who is 10 years old right now is going to be facing a very different and frightening world by the time that they are 50 or 60." More..
Post a Comment
Read more

USA: Wanted for Crimes Against the Planet 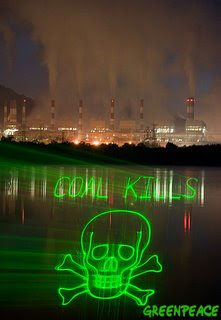 Center for American Progress. Posted November 16, 2006. Posted on Alternet World temperatures are rising to levels not seen in at least 12,000 years. Greenland's ice mass is melting at "what what NASA calls a 'dramatic' rate of 41 cubic miles per year." And unless climate change is reined in, "extreme drought could eventually affect one-third of the planet." More than 5,000 activists, scientists, and diplomats understand these facts and have gathered in Nairobi, Kenya for the annual two-week U.N. Climate Change Conference, which is now in its final three days. As U.N. Secretary General Kofi Annan wrote in a Washington Post op-ed, "The stakes are high. ... Yet too often climate change is seen as an environmental problem when it should be part of the broader development and economic agenda." The Bush administration and the 109th Congress haven't understood these stakes. Hopefully, the 110th Congress will. Incoming Senate Environment and
Post a Comment
Read more

November 18, 2006
Katie Kelly, NY Times BOULDER, Colo., Nov. 14 — Voters in this liberal college town have approved what environmentalists say may be the nation’s first “carbon tax,” intended to reduce emissions of heat-trapping gases. The tax, to take effect on April 1, will be based on the number of kilowatt-hours used. Officials say it will add $16 a year to an average homeowner’s electricity bill and $46 for businesses. City officials said the revenue from the tax — an estimated $6.7 million by 2012, when the goal is to have reduced carbon emissions by 350,000 metric tons — would be collected by the main gas and electric utility, Xcel Energy, and funneled through the city’s Office of Environmental Affairs . The tax is to pay for the “climate action plan,” efforts to “increase energy efficiency in homes and buildings, switch to renewable energy and reduce vehicle miles traveled,” the city’s environmental affairs manager, Jonathan Koehn, said. More
Post a Comment
Read more

by CORNELIA DEAN, NY Times If fishing around the world continues at its present pace, more and more species will vanish, marine ecosystems will unravel and there will be “global collapse” of all species currently fished, possibly as soon as midcentury, fisheries experts and ecologists are predicting. The scientists, who report their findings today in the journal Science, say it is not too late to turn the situation around. As long as marine ecosystems are still biologically diverse, they can recover quickly once overfishing and other threats are reduced, the researchers say. But improvements must come quickly, said Boris Worm of Dalhousie University in Nova Scotia, who led the work. Otherwise, he said, “we are seeing the bottom of the barrel.” More
Post a Comment
Read more

Dawn of the "Solar Salon" in US Living Rooms 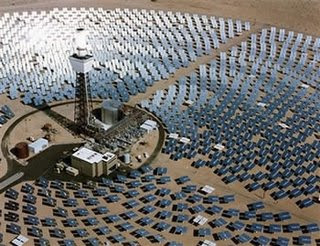