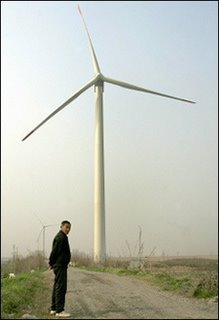 Published on Thursday, January 12, 2006 by Agence France Presse,posted to Commondreams.

The world's most populated nation has already successfully pioneered the use of small wind turbines, hydro generators, and biogas plants for power generation in remote rural areas.

China is world leader not only in solar hot water technology but also in producing super-efficient compact fluorescent light bulbs.

It is also aiming for an ingenious bus rapid transit system that combines the speed of a subway with the affordability of a bus. Trials have been held and bus ridership has jumped five fold during rush hour, the report said.

Anonymous said…
I am impressed