Showing posts from November, 2005
Show all

November 29, 2005
Energy Journalist "BP today announced that it plans to double its investment in alternative and renewable energies to create a new low-carbon power business with the growth potential to deliver revenues of around $6 billion a year within the next decade. Building on the success of BP Solar -- which expects to hit revenues of $1 billion in 2008 -- BP Alternative Energy will manage an investment program in solar, wind, hydrogen and combined-cycle-gas-turbine (CCGT) power generation, which could amount to $8 billion over the next ten years."
1 comment
Read more 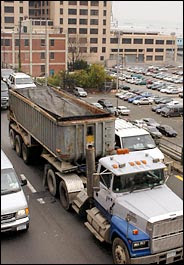 What Happens After Buy Nothing Day? 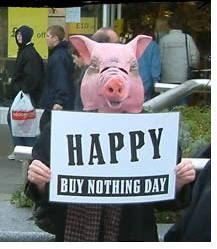 November 25, 2005 03:57 PM - Kyeann Sayer, San Francisco Buy Nothing Day and culture jamming in general rely on the idea that people need to be jolted out of their stupors and see the "truth" about overconsumption and media manipulation. But what happens after the sublime Reverend Billy has helped someone "see the light"?
Post a Comment
Read more

November 26, 2005
By LAURAN NEERGAARD,The Associated Press, Published in The Seattle Times. "Levels of carbon dioxide have climbed from 280 parts per million two centuries ago to 380 ppm today. Earth's average temperature, meanwhile, increased about 1 degree Fahrenheit in recent decades, a relatively rapid rise. Many climate specialists warn that continued warming could have severe impacts, such as rising sea levels and changing rainfall patterns."" "that rise is occurring at a speed that "is over a factor of a hundred faster than anything we are seeing in the natural cycles," Stocker added. "It puts the present changes in context."
Post a Comment
Read more

Yes, Virginia, there is Winter Biking! 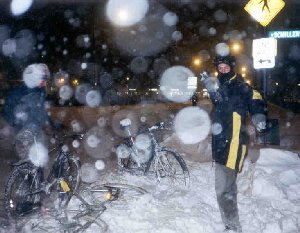 Tips from Winter Cyclists "I'm no cycling guru whose blood has been thickened on arctic expeditions. I'm just an urban bike commuter who, through experience and advice from friends, has gone from being a fair weather to all weather cyclist. The process was gradual. The first winter I didn't invest in special gear; I just piled on what I had. I learned how to ride in a range of weather conditions simply by doing it and watching my friends. Winter biking isn't something difficult, something you need to equip for. The only equipment you really need is the willingness to do it. - Gin Kilgore "
Post a Comment
Read more 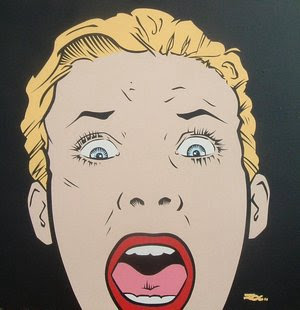 Scrutiny Hooligans Time to powerdown, learn to live on less, think before acting, shift the balance with out upsetting the cart, umm...or something like that. Most of my reading says this initial downturn in gasoline prices will only be temporary; basically until cold weather kicks in, and then all bets are off, as to affordability. We'll see, I suppose..
Post a Comment
Read more

Saving Energy: 101 Ways to Save

Powerhouse It may not seem like using a compact fluorescent light bulb or fixing a leaky faucet will do much to reduce your energy costs - or protect the environment. But if every household practiced just a few simple conservation ideas like the 101 easy ways to save below, we could reduce energy consumption by a significant amount. All it takes is a few minutes each month, and you'll notice a difference - and make a difference!
Post a Comment
Read more 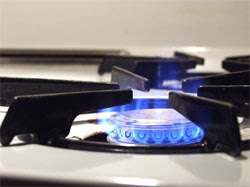 November 19, 2005 04:11 PM - Michael G. Richard, Ottawa Natural gas, on the other hand, flows a lot more easily, and normally does not have a lot of the constraints that producing oil has. Thus, if your pipeline can handle the flow, and there is a demand, the gas field can be drained much more rapidly, with a consequent dramatically more rapid conclusion to the flow. As Dr Campbell pointed out fields may last just months, and then "boom" they are gone.
Post a Comment
Read more

November 21, 2005
Published on Sunday, November 20, 2005 by the Observer/UK, Posted on Commondreams . Ghat was destroyed when a lake, high in the Himalayas, burst its banks. Swollen with glacier meltwaters, its walls of rock and ice had suddenly disintegrated. Several million cubic metres of water crashed down the mountain. When Ghat was destroyed, in 1985, such incidents were rare - but not any more. Last week, scientists revealed that there has been a tenfold jump in such catastrophes in the past two decades, the result of global warming. Himalayan glacier lakes are filling up with more and more melted ice and 24 of them are now poised to burst their banks in Bhutan, with a similar number at risk in Nepal. But that is just the beginning, a report in Nature said last week. Future disasters around the Himalayas will include 'floods, droughts, land erosion, biodiversity loss and changes in rainfall and the monsoon'. The roof of the world is changing, as can be seen by Nepal's Khumbu g
Post a Comment
Read more

The Big Thaw: Global Disaster Will Follow If the Ice Cap on Greenland Melts 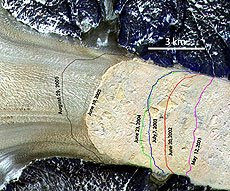 Published on Sunday, November 20, 2005 by the lndependent/UK, Posted on Commondreams Research to be published in a few days' time shows how glaciers that have been stable for centuries have started to shrink dramatically as temperatures in the Arctic have soared with global warming. On top of this, record amounts of the ice cap's surface turned to water this summer. The two developments - the most alarming manifestations of climate change to date - suggest that the ice cap is melting far more rapidly than scientists had thought, with immense consequences for civilisation and the planet. Its complete disappearance would raise the levels of the world's seas by 20 feet, spelling inundation for London and other coastal cities around the globe, along with much of low-lying countries such as Bangladesh.
Post a Comment
Read more 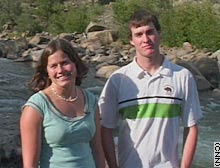 Friday, November 4, 2005; CNN "[South Main] is built on the principles of new urbanism, which are nothing new," Jed said. "It's essentially built around basic human needs, including places to work, places to shop, places to gather. The difference is that they're all within walking distance."
Post a Comment
Read more

I Vant to Drink Your Vatts

The Unwasteful Home, By MATTHEW L. WALD Published: November 17, 2005, Boston Globe There are billions of vampires in the United States, drawing more than enough current in the typical house to light a 100-watt light bulb 24/7, according to Lawrence Berkeley National Laboratories, a research arm of the Energy Department. These silent energy users include the chargers for devices that run on batteries, like cellphones, iPods and personal digital assistants, and all the devices around the house that have adapters because they run on direct current, like answering machines. Some have both batteries and steady power use, like cordless phones. Experts call all those adapters "wall warts." Many deliver in direct current only half as much energy as they suck out of the wall; the rest is wasted.
Post a Comment
Read more

By Marco Visscher, Ode. Posted November 12, 2005 . Without knowing it, 35-year-old Jeremiah Holland lost a lot more than weight when he decided to start seriously exercising two years ago. His racing bike helped him trim down from 118 to 90 kilos (260 to 200 pounds). What Holland could never have suspected was that during that period, he was also ridding his body of something else -- something he never knew was there: polychlorinated biphenyls (PCBs), dichloro-diphenyl-trichloroethane (DDT), perfluoroctane sulfonates (PFOS), phthalates and a host of other unpronounceable chemical substances that are stored in fat -- and that remain in our bodies for a long, long time. Holland would never have been the wiser if he hadn't been chosen as a test subject in a project conducted by the Oakland Tribune, which studied the effect of toxic chemicals in the human body.
Post a Comment
Read more

The Bernie Bashers Gear Up

By Ruth Conniff,November 14, 2005, The Progressive Perhaps the most exciting Senate candidate in the nation is the independent, Socialist Congressman from Vermont, Bernie Sanders. Sanders is the real thing. A champion of his low-income, rural constituents--the dairy farmers and working poor of Vermont--and a star among Burlington progressives, Sanders has a compellingly straightforward way of talking about politics. And he has been tackling the problems that affect working families in a no-nonsense way. He was the first member of Congress to take a busload of constituents across the border to buy drugs in Canada, and he has had frequent, confrontational debates with Alan Greenspan when the former chairman of the Federal Reserve appeared before Congress.
Post a Comment
Read more

Would You Choose Richmond or Atlanta? 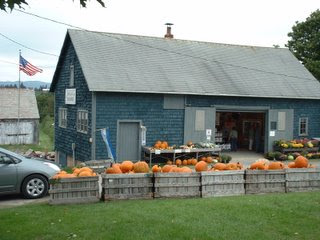 On a recent boadcast of Living on Earth on National Public Radio there was a piece about the foliage in New England this year as being particularly lackluster. The piece was called "Foliage Prognosis: Fair". Host Steve Curwood interviewed Barry Rock at the University of New Hampshire to learn why. He's a professor at the University of New Hampshire in the Complex Systems Research Center. He's also a botanist and a biologist. Among the things that Barry discussed was that he has been working on 100 year estimates of how the earth is expected to warm. They have developed two estimates given current information and trends, one with an increase in 6 degrees and one with an increase in 10 degrees. Based on the 6 degree estimates, we in the northeast can expect the same average temperature as Richmond Virginia. With the 10 degree change, we can expect the same temperature as Altanta Georgia. This of course has been our making and it will profoundly change the place we
1 comment
Read more

by Clive Davidson, ZFP Magazine In the woods of East Sussex, England, sits a house that is so at one with its environment that TV architectural critic Kevin McCloud describes it as “breathing in time to the trees around it”.
Post a Comment
Read more 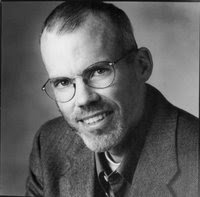 by Bill Mckibben, Orion Online Is There a Friendlier Option for the Post-Peak Future? "Can you feel the mood shifting? I can. A year of spiking speculation about peak oil and the death of suburbia has rattled lots of Americans. Plenty of people suddenly feel that real, civilization-shaking change might be around the next corner. And plenty of them also feel frozen in the headlights, unsure what, if anything, to do about it. Other than wait."
Post a Comment
Read more

How to Kick the Oil Habit

November 02, 2005
Michael D. Lemonick, Time Magezine, 23 October 2005 "It doesn't take a Ph.D. economist to figure out why that's happening--just a stop at the gas station, where prices are roughly 25% higher than they were a year ago, and where, despite a slight easing as the effects of hurricanes Katrina and Rita recede, they will probably go higher still before too long. Home heating oil is 50% higher than last year too, and natural gas will probably jump similarly. Those dramatic increases, Federal Reserve Chairman Alan Greenspan said in a speech last week, will create a significant drag on economic growth "from now on."
Post a Comment
Read more
More posts