Moonbase Planned While Earth is in Peril 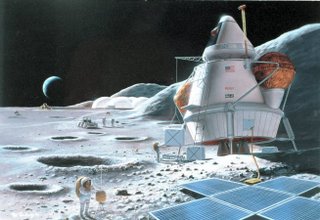 According to NBC news today, NASA is in the planning stages of building a moonbase. The moonbase is a step towards a mission to Mars. Though it appears that a base to the moon may be possible, the news broadcast indicated that there is no master plan or funding for a future Mars mission.

I for one have never been fond of the NASA program. I have also never bought the marketing ploy that the billions spent on space exploration have brought us wonderful inventions that have greatly improved our lives. I would like to know which of the religions practiced in this country espouse the worship in material goods over the helping of the poor and disadvantaged? I seek knowledge, understanding and enlightenment concerning the ethics that drive us to spend vast public funds on "space exploration" at the expense of our most vulnerable. Is this a shining example of a representative democracy?

James E Hansen, the eminent NASA scientist has clearly stated that if we do not DRASTICALLY reduce our carbon emissions in the next 10 years, there will be cycle in place in which nothing we do will matter. We have a very small window to correct this problem since more than a year has passed since his statement. We need an Apollo mission to save earth and we need it now. It is imperative that those scientists at NASA redirect their sights towards where their feet are and begin to tackle the enormous task of developing an infrastructure that has 0 carbon emissions. Otherwise, the outrageous waste of time and resources on space flight resembles nothing more than the symphony playing on the deck of the Titanic.