By 2040, Greenhouse Gases Could Lead to an Open Arctic Sea in Summers 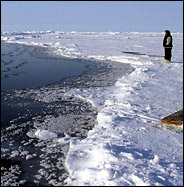 
New studies project that the Arctic Ocean could be mostly open water in summer by 2040 — several decades earlier than previously expected — partly as a result of global warming caused by emissions of greenhouse gases.

The projections come from computer simulations of climate and ice and from direct measurements showing that the amount of ice coverage has been declining for 30 years.

The latest modeling study, being published on Tuesday in the journal Geophysical Research Letters, was led by Marika Holland of the National Center for Atmospheric Research in Boulder, Colo.