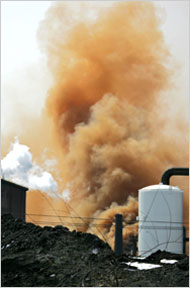 
Unless China finds a way to clean up its coal plants and the thousands of factories that burn coal, pollution will soar both at home and abroad. The increase in global-warming gases from China's coal use will probably exceed that for all industrialized countries combined over the next 25 years, surpassing by five times the reduction in such emissions that the Kyoto Protocol seeks.


The sulfur dioxide produced in coal combustion poses an immediate threat to the health of China's citizens, contributing to about 400,000 premature deaths a year. It also causes acid rain that poisons lakes, rivers, forests and crops.

Anonymous said…
Hi! Bouncing around, I found your link on Enviromental Blogs page. Been watching the China scene, man, what a mess. Stumbled across an article the other day while writing a piece about China myself. To quote the article:

The U.S. Environmental Protection Agency estimates that on certain days nearly 25 percent of the particulate matter in the skies above Los Angeles can be traced to China.

I am trying to make some enviro contacts and have stopped by several other blogs this evening. I will try to drop back by later.
9:58 PM