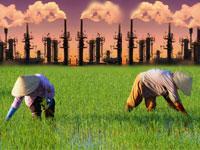 Vaclav Smil, distinguished professor at the University of Manitoba and author of the 2004 book Enriching the Earth: Fritz Haber, Carl Bosch and the Transformation of World Food Production, has demonstrated the global food system's startling degree of dependence on nitrogen fertilization. Using simple math -- the kind you can do in your head if there's no calculator handy -- Smil showed that 40 percent of the protein in human bodies, planet-wide, would not exist without the application of synthetic nitrogen to crops during most of the 20th century.

"That means that without the use of industrially produced nitrogen fertilizer, about 2.5 billion people out of today's world population of 6.2 billion simply could never have existed."


"If farming depended solely on naturally occurring and recycled nitrogen fertility, the planet's cropped acreage could feed only about 50 percent of the human population at today's improved nutrition levels, according to Smil. But absolute dependence on synthetic nitrogen is geographically lopsided -- it's largely in countries with a high human-cropland ratio that survival hinges on nitrogen fertilizer. This includes India, Indonesia, and China, where four in 10 human beings on Earth reside."