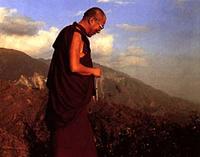 The antidote to hatred in the heart, the source of violence, is tolerance. Tolerance is an important virtue of bodhisattvas [enlightened heroes and heroines] -- it enables you to refrain from reacting angrily to the harm inflicted on you by others. You could call this practice "inner disarmament," in that a well-developed tolerance makes you free from the compulsion to counterattack. For the same reason, we also call tolerance the "best armor," since it protects you from being conquered by hatred itself.