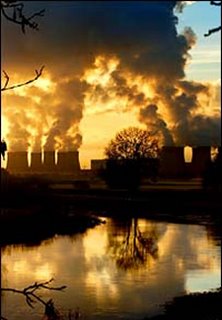 The rise in humanity's emissions of carbon dioxide has accelerated sharply, according to a new analysis.

The trend towards increased energy efficiency is levelling off.

The Global Carbon Project says that emissions were rising by less than 1% annually up to the year 2000, but are now rising at 2.5% per year.

It says the acceleration comes mainly from a rise in charcoal consumption and a lack of new energy efficiency gains.

The global research network released its latest analysis at a scientific meeting in Australia.

Dr Mike Rapauch of the Australian government's research organisation CSIRO, who co-chairs the Global Carbon Project, told delegates that 7.9 billion tonnes (gigatonnes, Gt) of carbon passed into the atmosphere last year. In 2000, the figure was 6.8Gt.

The finding parallels figures released earlier this month by the World Meteorological Organization showing that the rise in atmospheric concentrations of CO2 had accelerated in the last few years.