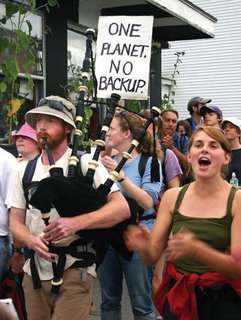 A BAGPIPER HERALDS the end of the 50-mile walk across Addison and Chittenden counties to raise awareness of global warming. The five-day event attracted marchers of all ages.
Independent photo/Angelo Lynn

By ANGELO LYNN AND HARRIETTE BRAINARD, The Addison Independent

“What we’ve just done (getting the candidates to sign the pledge) is an achievement beyond our wildest hopes when we first started out five weeks ago,” environmental author and Ripton resident Bill McKibben told the crowd of supporters at Monday’s rally. In response, the crowd — as it had done several times during speeches by candidates and rally-organizers — roared with its enthusiastic approval.

The pledge, McKibben explained in an on-line daily journal, raised the bar in Vermont politics “to the point where anyone wishing to be taken seriously needs to champion an 85 percent reduction in carbon emissions by 2050, the rapid phase-in of 40-mile-per-gallon cars, and a national plan to get 20 percent of our power from renewables by 2020.

“As crucial,” he continued, “we demonstrated that at least for Vermont voters this was not a second- or third-tier issue — it was as crucial to getting elected as your position on jobs or the economy or all the things the political pros always call the real issues.”

"Scientists say we must begin to significantly reduce our emissions within the next 10 years if we are to avoid the most serious impacts of global warming. That is why I support the goal set by Senator Jeffords in his global warming bill -- an 80 percent reduction in global warming pollution by mid-century. To achieve that goal we need to start an energy revolution. I will work to promote global warming solutions, such as a national renewable energy standard of 20 percent by 2020 and an increase in mileage standards to 40 miles per gallon."