What to Do with Old Electronics 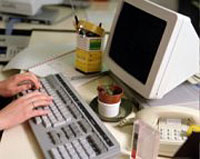 Rapid advances in technology come with a price: the equally rapid pace of obsolescence. The average lifespan of a computer, for example, will have dropped from 4.5 years in 1992 to approximately two years by 2005.

As a result, "e-waste"—discarded computers, TVs, cell phones, and other electronics—comprises one to four percent of the municipal solid waste stream, according to the Environmental Protection Agency. What's worse, this equipment is often made from non-renewable resources and contains hazardous chemicals including lead, chromium, cadmium, and mercury.