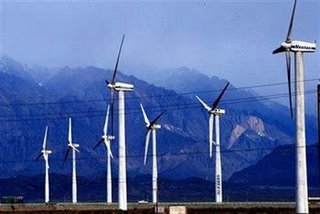 Turbines spin at a wind farm in Daban, northwest China's Xinjiang Uygur Region, March 1, 2005. Wind turbines may one day replace hydropower as China's second-largest source of electricity, if the country continues with a drive to boost renewable generation. Wind energy is emerging as a centerpiece of the new energy economy because it is abundant, inexpensive, inexhaustible, widely distributed, clean, and climate-benign,'' meaning that it does not add to global warming, said Lester Brown, president of the Earth Policy Institute. REUTERS/China Newsphoto
by Abid Aslam, Oneworld.net, posted on Commondreams.org


WASHINGTON - Alongside the war in Iraq, Americans worry most about U.S. dependence on foreign oil, a leading pollster said Thursday.
While most appeared fatalistic over problems like job outsourcing, around half said the government can do something about energy dependence, according to a survey run by Daniel Yankelovich, funded by the Ford Foundation, and published by the Council on Foreign Relations in its journal Foreign Affairs.

Environmentalists appeared to validate that sentiment, separately highlighting rapid growth in homespun energy alternatives and urging policymakers to boost support for the sector.

Forty-six percent gave policymakers a failing grade for their efforts to wean the nation off foreign oil and natural gas.

KM said…
See the original at us.oneworld.net/article/view/130133/1/, which includes comments. In particular, note the critique titled "Oil is for heat and transportation," which notes the darker side of Lester Brown's corporate boosterism.
10:27 AM