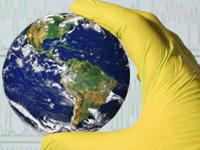 Modern human plagues like bird flu aren't the result of mysterious forces. Whether we mean to or not, we bring them on ourselves.

When Michael Crichton's first novel, "The Andromeda Strain," was published in 1969, it was scary but also strangely reassuring. If some new disease were to threaten humanity with a deadly pandemic, it seemed, the microbe responsible would come from another planet. The march of medical progress appeared to have terrestrial germs on the run.

Twenty-five years later, when Laurie Garrett published her nonfiction bestseller, "The Coming Plague," people were waking up to the fact that our own abused planet is perfectly capable of spawning a steady stream of new diseases without any help from alien worlds.

Today, old familiar scourges like tuberculosis, malaria, measles, and diarrhea -- and a newer one, AIDS -- are the world's biggest killers, but they've been joined by a host of newcomers. Indeed, one could get the impression that each year brings a new disease. That's because it does.

Anca said…
Interesting that among the books mentioned, "The Hot Zone" by Richard Preston was not. It was about ebola and chillingly similar to "The Andromeda Strain." I just put a silly post on my own blog about the language of diseases.
11:15 AM