Antarctic Air is Warming Faster Than Rest of World 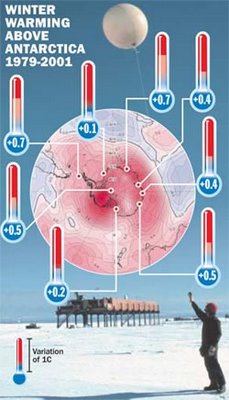 
AIR temperatures above the entire frozen continent of Antarctica have risen three times faster than the rest of the world during the past 30 years.


While it is well established that temperatures are increasing rapidly in the Antarctic Peninsula, the land tongue that protrudes towards South America, the trend has been harder to confirm over the continent as a whole.

Now analysis of weather balloon data by scientists at the British Antarctic Survey (BAS) has shown that not only are the lower reaches of the Antarctic atmosphere warming, but that they are doing so at the fastest rate observed anywhere on Earth.

This signature of climate change is three times stronger than the average observed around the world, suggesting that global warming is having an uneven impact and that it could be greater for Antarctica.