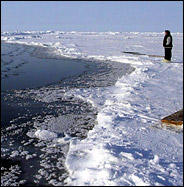 
Many scientists say it has taken a long time for them to accept that global warming, partly the result of carbon dioxide and other heat-trapping gases in the atmosphere, could shrink the Arctic's summer cloak of ice.

But many of those same scientists have concluded that the momentum behind human-caused warming, combined with the region's tendency to amplify change, has put the familiar Arctic past the point of no return.