Chilling Effects of Climate Change in the Antarctic 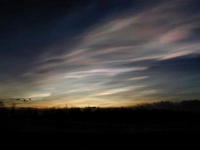 According to the Argentine Antarctic Institute, in September - the start of the southern hemisphere spring - the hole in the ozone layer reached 28 million square kilometres, representing an eight percent increase from 2004. In addition, the ozone value dropped from 95 to 87 Dobson Units (a measure of the "thickness" of the ozone layer, with 220 units considered the acceptable lower limit).