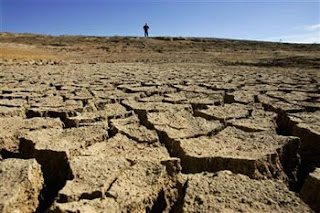 Rising temperatures will leave millions more people hungry by 2080 and cause critical water shortages in China and Australia, as well as parts of Europe and the United States, according to a new global climate report.


By the end of the century, climate change will bring water scarcity to between 1.1 and 3.2 billion people as temperatures rise by 2 to 3 Celsius (3.6 to 4.8 Fahrenheit), a leaked draft of an Intergovernmental Panel on Climate Change (IPCC) report said.


The report, due for release in April but detailed in The Age newspaper, said an additional 200 million to 600 million people across the world would face food shortages in another 70 years, while coastal flooding would hit another 7 million homes.


"The message is that every region of the earth will have exposure," Dr Graeme Pearman, who helped draft the report, told Reuters on Tuesday.


"If you look at China, like Australia they will lose significant rainfall in their agricultural areas," said Pearman, the former climate director of Australia's top science body, the Commonwealth Scientific and Industrial Research Organization.