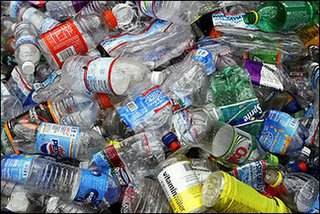 
The study said that demand for bottled water soared in developing countries between 1999 and 2004 with consumption tripling in India and more than doubling in China during that period.

That has translated into massive costs in packaging the water, usually in plastic bottles made of polyethylene terephthalate (PET) which is derived from crude oil, and then transporting it by boat, train or on land.

"Making bottles to meet Americans' demand for bottled water requires more than 1.5 million barrels of oil annually, enough to fuel some 100,000 US cars for a year," according to the study. "Worldwide, some 2.7 million tons of plastic are used to bottle water each year."

Once the water is consumed, disposing the plastic bottles poses an environmental risk.

The study, citing the Container Recycling Institute, said that 86 percent of plastic water bottles in the United States end up as garbage and those buried can take up to 1,000 years to biodegrade.