The Big Thaw: Global Disaster Will Follow If the Ice Cap on Greenland Melts 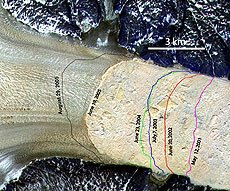 Published on Sunday, November 20, 2005 by the lndependent/UK, Posted on Commondreams

Research to be published in a few days' time shows how glaciers that have been stable for centuries have started to shrink dramatically as temperatures in the Arctic have soared with global warming. On top of this, record amounts of the ice cap's surface turned to water this summer.

The two developments - the most alarming manifestations of climate change to date - suggest that the ice cap is melting far more rapidly than scientists had thought, with immense consequences for civilisation and the planet. Its complete disappearance would raise the levels of the world's seas by 20 feet, spelling inundation for London and other coastal cities around the globe, along with much of low-lying countries such as Bangladesh.