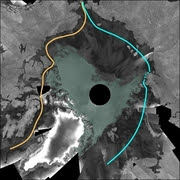 PARIS (AFP) - The Northwest Passage, the dreamed-of yet historically impassable maritime shortcut between Europe and Asia, has now fully opened up due to record shrinkage of Arctic sea ice, the European Space Agency (ESA) said on Friday.

It released a mosaic of images, taken in early September by a radar aboard its Envisat satellite, which showed that ice retreat in the Arctic had reached record levels since satellite monitoring began in 1978.

Anonymous said…
You might find it interesting that the Speaker of the House in Kansas signed a letter supporting a new coal burning electric plant. His statement said that the "current climate change is good for Kansas and is beneficial to the Kansas' economy." Going on he stated that a one-degree change in temperature over the past century has made it better for crops such as cotton and cattle ranching." His quotes go on in this general vein and can be found in the 9/28/07 edition of the Salina Journal with the headline GOP House Reps Like New Coal Plants. I believe that this means to hell with the planet. Global warming is good for Kansas.
12:11 PM

Raincloud said…
One of my favourite pastimes at lunchtime at work is browsing the various blog sites. I have found numerous well written articles of interest.
Today I was searching wordpress for ''environment'' and came across this site
http://handsacrossoceanministry.wordpress.com/


My first reaction was shock, disbelief and anger. How can so called religious people not care about the environment and then have the audacity to use God in their justification of their beliefs.

These people need locking away.
2:16 PM