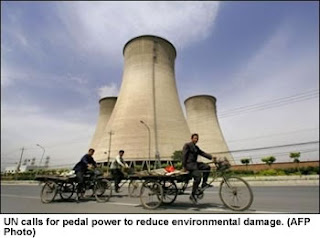 KUALA LUMPUR - More bicycle riding and other lifestyle changes are urgently needed to reduce climate-altering carbon emissions that are damaging Asia’s health and could also threaten the economy, the World Health Organisation said Monday.
Climate change contributes directly or indirectly to about 77,000 deaths per year in the region, according to WHO estimates.

“So far the impact is on the health of the people. If the trend continues, it may have an impact on the economy,” said Shigeru Omi, WHO’s regional director for the Western Pacific.

“Of course the threat is there. We should not wait for that to happen,” he told reporters at the start of a four-day conference on the impact of climate change and health in Southeast and East Asian countries.

Omi said urgent action was needed because Asia’s share of the world’s greenhouse gas emissions was expected to grow larger with the rapid economic expansion of China and India.

“We have now reached a critical stage at which global warming already has seriously impacted lives and health and this problem will pose an even greater threat to mankind in coming decades if we fail to act now,” Omi said.

He said that in some countries environmental issues were not given the highest priority but “if we ignore the environment, humanity will suffer.”

Libby Myers said…
Hey found your site while looking for environmental blogs to recommend to my boss. We are looking to add coverage of this in the future, feel free to send us tips! Great blog!

Unknown said…
Would you be interested in a link exchange? The Environmental Blog
6:03 PM