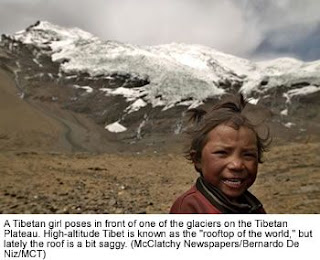 KAROLA PASS, Tibet - The glaciers of the Himalayas store more ice than anywhere on Earth except for the polar regions and Alaska, and the steady flow of water from their melting icepacks fills seven of the mightiest rivers of Asia.

Now, due to global warming and related changes in the monsoons and trade winds, the glaciers are retreating at a startling rate, and scientists say the ancient icepacks could nearly disappear within one or two generations.

Curiously, there’s little sense of crisis in some of the mountainous areas. Indeed, global warming is making the lives of some high-altitude dwellers a little less severe.

Here at the foot of the towering Nojin Gangsang mountain, an ice-covered 23,700-foot peak, herders notice the retreat of the glaciers but say they feel grateful for the milder winters and increasing vegetation on mountain slopes in summers.

But for people living in the watershed of the Himalayas and other nearby mountain ranges along the Tibetan Plateau, glacial melt could have catastrophic consequences.

Anonymous said…
The production of billions of disposable razors comes at a cost-- increased CO2 emissions into the environment. Woah. There goes another

glacier. Landfills are filling up, too.

Extender is a deep green product, so using it makes the world a better place. Don’t throw away your razors–Rejuvenate them with Razor