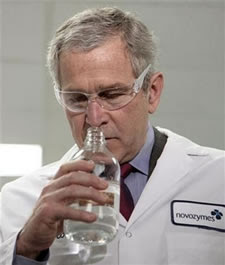 The ethanol boom is coming. The twin threats of climate change and energy security are creating an unprecedented thirst for alternative energy with ethanol leading the way.

An ethanol plant is seen by sugar cane fields in Piracicaba, Brazil, Friday, March 2, 2007. Just an hour's drive outside this traffic-choked metropolis where U.S. President George W. Bush kicks off a Latin American tour Thursday, sugar cane fields stretch for hundreds of kilometers, providing the ethanol that fuels eight out of every 10 new Brazilian cars.

That process is set to reach a landmark on Thursday when the US President, George Bush, arrives in Brazil to kick-start the creation of an international market for ethanol that could one day rival oil as a global commodity. The expected creation of an "OPEC for ethanol" replicating the cartel of major oil producers has spurred frenzied investment in biofuels across the Americas.

But a growing number of economists, scientists and environmentalists are calling for a "time out" and warning that the headlong rush into massive ethanol production is creating more problems than it is solving.