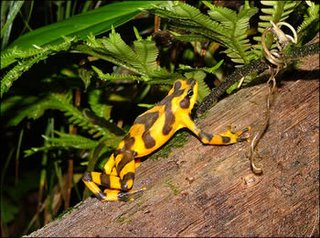 
LONDON -- An infectious fungus aggravated by global warming has killed entire populations of frogs in Central and South America and driven some species to extinction, scientists said yesterday. In research that showed the effects of rising temperatures on delicate ecosystems, a team of researchers found that a warming atmosphere encouraged the spread of a fungus that has wiped out species of harlequin frogs and golden toads. ''This is the first clear evidence that widespread extinction is taking place because of global warming," Dr. Alan Pounds, an ecologist at Monteverde Cloud Forest Preserve in Costa Rica, said in an interview.